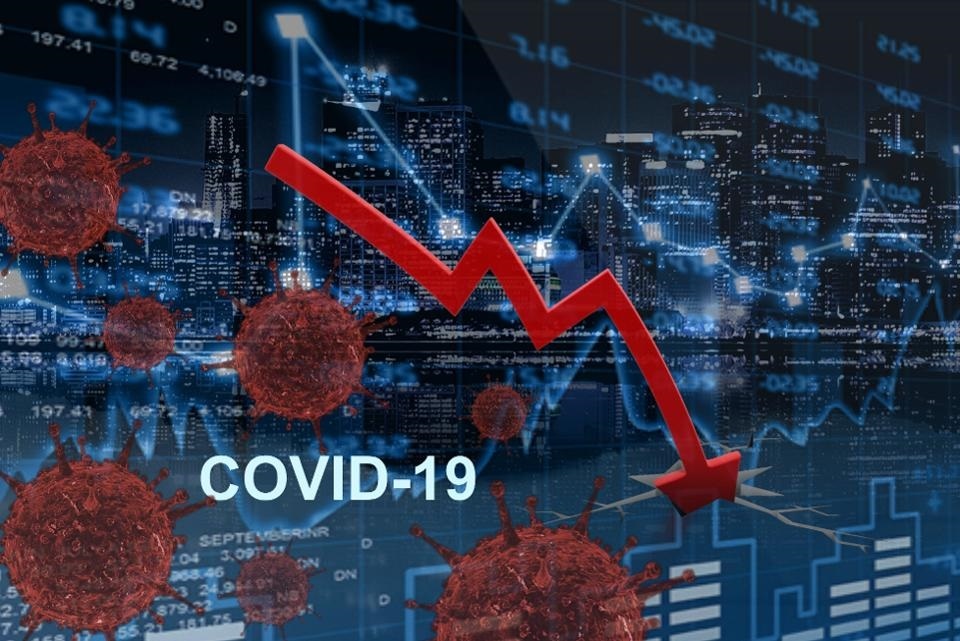 A Bounce in Economic Activity and Covid-19 Cases

Last month, much of the economic data was extremely negative, with record declines in employment (U.S. BLS employment data) and consumer spending (U.S. BEA). The speed of the decline had no modern precedent.

With government-imposed lockdowns and business closures, companies furloughed employees at a furious and painful pace. It is difficult to express in words, but it has been disheartening to see friends and family members sidelined from the workforce.

We are now in a [[https://www.nber.org/cycles/june2020.html recession]], according to the National Bureau of Economic Research. The NBER is the official arbiter of recessions and expansions. The prior expansion, which began in 2009, officially peaked in February, having lasted a record 128 months.

In making its determination, the NBER concluded, “The unprecedented magnitude of the decline in employment and production…warrants the designation of this episode as a recession, even if it turns out to be briefer than earlier contractions.”

The [[https://www.nber.org/cycles.html shortest recession on record]] lasted just six months and occurred in 1980. Second place: a seven-month recession in 1918-19, which was tied to the Spanish flu pandemic. There are five recessions that lasted eight months, including the 1957-58 recession that coincided the Asian flu pandemic.

While the economy is much different today, the recovery from the short, but steep 1957-58 recession was robust (St. Louis Federal Reserve).

Given surprisingly strong data in May, April may mark the bottom of the economic cycle. If so, it will be the shortest recession on record. Let’s also acknowledge that the speed and depth of the decline have no modern parallels.

With massive support from the Federal Reserve, the federal government, and the reopening of previously closed businesses, employment in May unexpectedly surged a record 2.5 million. The private sector fared even better, with a gain of 3.1 million (U.S. BLS).

[June employment data will be released on July 2–you may decide to include and update the numbers above if there are revisions].

Consumer spending, which fell a record 6.6% in March and a record 12.6% in April, rebounded by a record 8.2% in May (St. Louis Federal Reserve). Pent-up demand, stimulus checks, generous unemployment benefits, a rise in employment, and reopened businesses supported sales.

Consumer confidence is also improving per the Conference Board’s Consumer Confidence Index. It remains well below pre-coronavirus levels, but rising confidence and re-openings are supportive of economic activity.

Still, not all is rosy. And a strong recovery is not assured, as visibility remains incredibly limited.

Layoffs, as measured by first-time jobless claims (Department of Labor), are slowing but remain at unusually high levels. The weekly layoff numbers have been more than double what we saw at the peak of the 2007-09 recession.

In his [[https://www.federalreserve.gov/newsevents/testimony/powell20200630a.htm  testimony before House committee on June 30]], Fed Chief Powell said, “Many businesses are opening their doors, hiring is picking up, and spending is increasing. Employment moved higher, and consumer spending rebounded strongly in May. We have entered an important new phase and have done so sooner than expected.”

But he also recognized the need to keep the virus in check. “The path forward for the economy is extraordinarily uncertain and will depend in large part on our success in containing the virus. A full recovery is unlikely until people are confident that it is safe to reengage in a broad range of activities,” Powell added.

We are seeing a spike in Covid-19 cases in many states, which is creating a new round of uncertainty. It has fueled choppier day-to-day activity in the market. Yet, at least so far, the bull market seems to be coexisting with the rise in cases.

U.S. Treasury Secretary Steven Mnuchin took a more optimistic tone in his [[https://financialservices.house.gov/uploadedfiles/hhrg-116-ba00-wstate-mnuchins-20200630.pdf testimony]] with Powell. “The Blue Chip Report is forecasting that our GDP will grow by 17% annualized in the third quarter, and by 9% in the fourth quarter,” which follows what is expected to be record contraction in Q2. Mnuchin also expects significant progress on the employment front.

Economists give economic recoveries what might be called a letter grade when discussing possible paths. It’s not the traditional A through F scale. Instead, the letter intuitively describes the shape of the recovery.

A V-shaped recovery would be ideal, as it would represent a robust bounce. Might we get a V? Data in May was unexpectedly strong and cautiously encouraging. However, even during what we might consider more normal times, forecasting is difficult. Today, there’s no playbook and no framework to model outcomes.

The strong rebound in stocks since the late-March low is astounding, especially given the economic damage. It suggests the collective wisdom of investors is more optimistic.

Fed support, rock bottom interest rates, the reopening trade, and stronger economic data have helped. I also believe investors are looking past this year’s hit to corporate profits and are expecting an upturn in 2021.

The jump in daily cases has created some renewed volatility, and it bears watching, but it has yet to knock the bulls off course.

Ultimately, the path of the virus will play the biggest role in how the economic outlook unfolds.

Some folks are itching to get back to normal, while others remain on guard against the disease and are taking a more cautious approach. It may take time for some businesses to fully recover. Some never will.

My opinion, don’t expect a return to a pre-Covid jobless rate anytime soon. But investors are betting that an economic bottom is in sight.

Try to look past continued volatility. However, based on recent economic reports, I think we hit that bottom in April. 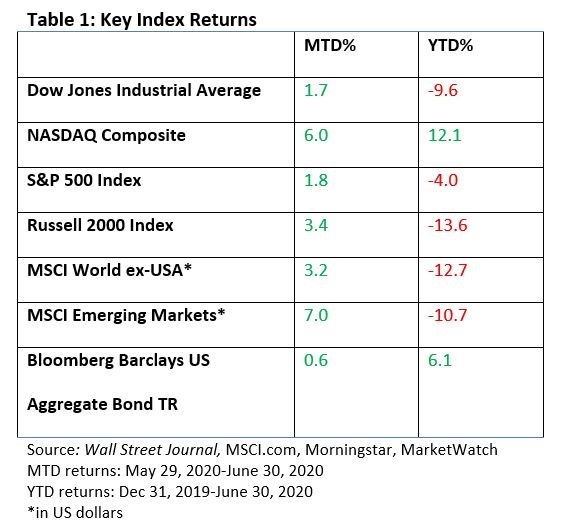 None of us expected an economic upheaval spawned by a health crisis as the year began.

As I discuss some of the lessons and takeaways from the Covid-19 crisis, you’ll probably recognize some of the themes. Let’s not forget that the fundamentals–the core financial precepts–are always the building blocks of any credible financial plan.

1. Money at the end of your month. Saving for an emergency cannot be underestimated. Three to six months is optimal. But there is an added benefit–financial peace of mind.It’s reflected in the proverb “The borrower is servant to the lender.” It’s not that I would counsel against a mortgage for a home or a reasonable loan for a car. But accumulation of wants (not needs) with debt doesn’t bring contentment. Instead, it brings stress. I have seen it over and over. You want money at the end of your month, not month at the end of your money. A financial cushion eliminates one of life’s worries.

2. Wants vs. needs. Many of us have learned to do without certain things during quarantine. Whether we wanted to or not, we were forced to cut back on certain items. Ask yourself this question, “As businesses reopen, are there things I can do without? Can I continue to cutback and still maintain my lifestyle?” Many of our entertainment options have been curtailed. As we emerge from our homes and businesses reopen, are there items that can be trimmed from the budget? It’s not a cold turkey approach, i.e., no more eating out, sporting events, travel, or theater. But can we reduce expenditures on some items without sacrificing our overall lifestyle?

3. Diversification and tolerance for risk. We’ve just witnessed an unusual amount of stock market volatility. Calling it a rollercoaster does not fully capture the experience. The major indexes have erased much of their losses. Yet, how did you fare emotionally when stocks took a beating. Now is the time to reevaluate your tolerance for risk. We’d be happy to assist and make any adjustments as they relate to your longer-term financial goals.

4. Expecting the unexpected. From its March 2009 low to the February 2020 high, the bull market ran for over 10 years (measured by the S&P 500 Index). We know bear markets are inevitable, but I recognize that the onset of a steep decline may be unnerving.

Nonetheless, a well-diversified portfolio of stocks has historically had an upside bias. That upside bias is incorporated into the recommendations we make, even as our recommendations are tailored to your individual circumstances and goals.

Further, a healthy mix of fixed income helped cushion the decline. While we monitor events and the markets over a shorter-term period, let’s be careful not to take our eyes off your longer-term goals.

Be proactive, not reactive

The steps above are a broad overview and individual circumstances may vary. Taking inventory is critical. It’s half the battle. Be proactive, not reactive. You may find you are in a much better position than you realized. As always, we are here to help. I hope you’ve found this review to be helpful and educational.

I understand the uncertainty facing all of us. We are grappling with an economic and a health care crisis. It’s something none of us have ever faced. We have addressed various issues with you, but I have an open-door policy. If you have questions or concerns, let’s have a conversation. I am also a sounding board for your friends and family.  If they are important to you, then they are important to us.  That’s what I’m here for.